Choosing colour is a topic that I find really exciting, and trends in colours totally fascinating. This fascination has led me to researching and writing a series of articles for Twist Collective on the history and meanings behind different colours. In the latest winter issue I wrote about blue.

Blue, it seems, is a study in contrasts; visually, historically, metaphorically and also in its cultural associations.
It can range from a subtle, barely-there tint of powder blue to the deep depths of shades of navy or midnight blue.

Even though we are surrounded by what we would call blue skies and oceans, it seems that most ancient cultures didn’t have a word to describe the colour and used other ways to describe the sky, such as how many clouds were present.

Blue’s association with nobility (blue blood) and stature is in direct opposition to the notion of manual labourers being labeled as blue-collar workers.

Azure blue skies, enjoyed on a sunny day, are uplifting and make us think of being carefree. Bluebirds, commonly considered harbingers of joy, were referenced in the World War II era song “White Cliffs of Dover” as a promise of good times to come. But on the other hand we also describe being down in the dumps as feeling blue....especially in January!

So how do we come by all these seemingly opposing references?

To find out you can read the full article here: We all get the Blues.

Inevitably I do far more research than can be include in the articles.

So I thought that you might like to read what was left on the cutting room floor on the topic of blue:

Laundry blue, used to give laundry the appearance of a brighter white, was used throughout the 19th century and into the middle of the 20th century (and if fact can still be purchased today). The addition of very small amounts of synthetic ultramarine or cobalt blue to a final rinse actually tints the cloth a barely perceptible blue, counteracting the yellowing (blue is the complement to yellow on the colour wheel) that may have occurred over time.

Aside from blue cloth, blue, combined with white, has been a signature for Chinese pottery since the before the 14th century when they began using Cobalt Blue. One method of dying with synthetic Indigo was even named China Blue after the distinctive patterning. The blue and white combination eventually made its way into Islamic wares, especially tiles, and finally European dishes where Delft pottery is almost as recognizable. The English potter Wedgewood introduced his Jasperware in 1774 in several colours, but the pale blue version became the most popular and so coined the name “Wedgewood Blue”. 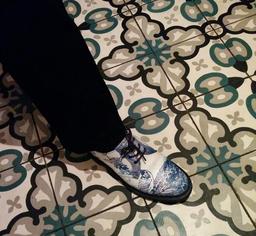 After finishing the research for the article on blue it seems that what I learned has begun to influence my footwear choices.

I'm cheating on Fluevog- these are Dr Martens called Willow.

If you would like to read my other articles on colour here are the links for: Purple Prose, Seeing Red, It's not easy being Green.​